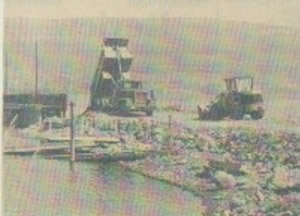 In 1951/1952 Lois Smith and Harry Dracus led the drive to start a yacht club. They prevailed upon the  1953 premier, W.A.C. Bennett, to grant Summerland Yacht Club use of the available lakeshore property.

The present lots were leased to the District of Summerland, which then entered into a sublease with the Summerland Yacht Club. Life memberships were sold for twenty five dollars each and the membership drive was on.

In 1956 the federal government promised to build a wharf breakwater. The shoreline was much different then we see today. High lake levels flooded up to the main gate. A launch ramp was dug out and cribbed. This was located under the present moorage security gate. Many, many truck loads of fill were dumped to build up the lakeshore. Piles were driven to form a headwall – all backfilled to extend further into the lake. The gas storage tank was located at the main gate and pumped to the wooden shack on the headwall. In 1957/1958 the new wooden wharf and breakwater were completed. 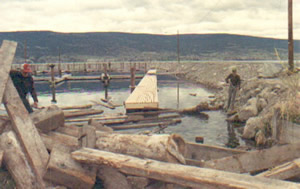 The new wharf provided 22 berths at the breakwater. SYC moorage holders were required to build and maintain their own berths, which consisted of oil drums for flotation, logs and rafts, all held in place by old boiler tubes driven into the mud. The boats at the wharf were protected but the yacht basin was exposed to north/south winds, and the catwalk to the wharf from shore was wide open. Wind and waves would break up the moorage. At this time club membership was about 65% social and 35% boating/moorage. There were many ongoing problems as the club borrowed to stay afloat. In 1972 $17,000 was borrowed. The moorage was increased to compensate in 1977. The moorage budget was $150 and we had approximately 30 boats. In 1979 the club borrowed $12,000.

By 1983 the club was $18,400 in debt. SYC could no longer employ bar or kitchen staff. As a result members no longer patronized the club. Also in 1983 the wharf was deemed unsafe due to its poor condition. In September 1983 the club was closed for restructuring and rebuilding.

From Crash To Recovery 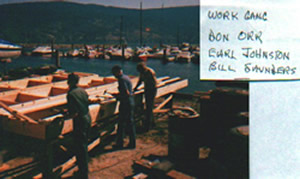 In 1983 the club was over eighteen thousand dollars in debt and could no longer employ bar or kitchen staff. Members failed to patronize the club. The wharf breakwater was deemed in poor condition and unsafe. The club was shut down in September. The upcoming federal election gave us new hope. We all became Liberals. We wine and dined senator Ray Perault and obtained three hundred and eighty thousand dollars to construct a rock breakwater.

With the full support of council and mayor Rita Hermiston, everything started moving that spring. Trucks were working long hours hauling rock from the Matt Henry property west of Summerland. A new rock berm was finished with the old wooden breakwater soon to be removed. The old wharf was brought ashore and with the new rock berm in place we still had to contend with the old piles, and a bunch of floating junk moorage. This was removed to facilitate dredging the basin. With the help of some 27 volunteers we commenced building gangways and fingers, poured 700 tire casings full of urethane for floatation, and used 1 ton of bolts and connecting plates to assemble the units. Volunteers worked 6 days a week to meet the our April 15th 1984 deadline. We managed to get the dredging done and the piles to anchor moorage driven at the same time. While new moorage was being placed, the old breakwater was being removed. Deck sections were cut loose and dropped, piles pulled (over 600) and floated ashore. The timber was salvaged and piles were sold to a Kelowna landscaper. Other than the pile driver operator and the dredging crew, all work was done by volunteers.

The above construction was made possible by a loan guarantee of $42,000 by the District. This was paid off in full over the next 5 years. The ensuing years saw the SYC club grow and grow. The debts were paid off, and there was money in the bank. The lack of membership support for the club dictated that the club close after boating season each year and open only for special functions. Many efforts have been made over the years to have club services available on a day to day basis, however none have proven financially viable. Fourteen years later the moorage basin was upgraded and the yacht basin stripped once again making way for more substantial moorage structures. 1999 saw the construction of a new headwall. Club management has greatly improved over the last years and the Summerland Yacht Club continues to grow and prosper. In 2014, the Club invested in a dredging project to maintain the basin. In 2015, a multi-year project to replace all docks and fingers commenced.

We have the best marina on Okanagan Lake. Many of the original crew have passed over the bar – enjoy their legacy – pass it on.

Do you really want to delete card?

This process cannot be undone.

Card has been deleted successfully.